Hailed as the “Upgraded Safemoon”, 4JNET is set to debut on LBank, according to the official news. Soon, 4JNET holders will be able to transfer their assets to LBank for trading. This move provides a more powerful channel for the exchange and dissemination of 4JNET and is highly praised by the token industry.

Research work for LBank began in December 2015 and was officially launched in October 2016. As an established trading platform for digital assets for global users, LBank offers professional asset management programs. There are currently a total of 604 trading pairs with 24-hour sales of up to $ 170 million.

To the best of our knowledge, the unit price for the limited NFTs from 4JNET has increased from 1 BNB to 3 BNB. 4JNET issues a total of 5,000 limited edition NFTs, and all NFT holders can share 30% of all tokens issued, unlock 2% of them every day and enjoy a 3% reduction in service fee. Currently, 3,748 limited edition NFTs have been sold by 4JNET and there are only 1,252 left which proves a huge fever.

Why is 4JNET so popular?

Well the key is in its unique mechanism! 4JNET has implemented a mechanism to lower service fees in order to maintain price stability. More specifically, 90% of the original transaction amount is retained as a service fee; As transactions increase, the service fee will gradually be reduced to at least 10% (it has now been reduced to 10%). In addition, 6% of the transaction amount is distributed to all token holders in the form of tokens and the remaining part is automatically transferred to the liquidity pool.

In addition, 4JNET also proactively performs deployments in areas such as NFT and Metaverse. It is said that 4JNET is building a metaverse system called “4JPASS” where celebrities, doctors, shifts, KOLs or talents can consume 4JNET tokens to create various organizations including unions, groups, communities, institutions etc. ( namely the creation of dedicated NFT).

Identity is the fundamental element to enter and dominate the metaverse. The users can join a specific organization and create the skin; the used 4JNET tokens are partly transferred to the project team as a service fee, while the remaining part is freely distributed to fans by the founders of the organization or for other purposes.

Since its inception, 4JNET has drawn the attention of global users. 4JNET’s debut at LBANK will draw more users’ attention to 4JNET. We firmly believe that active users in the 4JNET ecosystem will see a new round of growth. 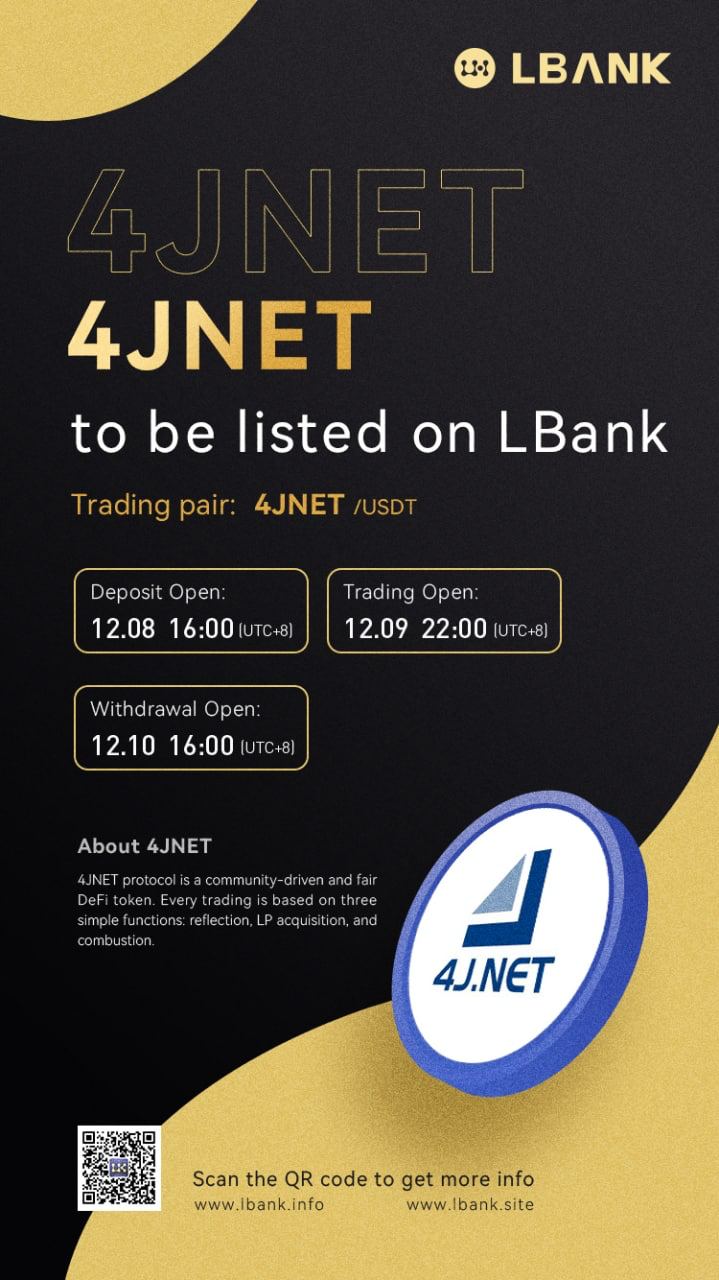 In the future, LBank and 4JNET will go hand in hand to promote the global development of digital finance, DEFI, GAMEFI and Metaverse, to provide users with more convenient and faster digital financial services, and to enable global users to share the benefits of the digital economy .